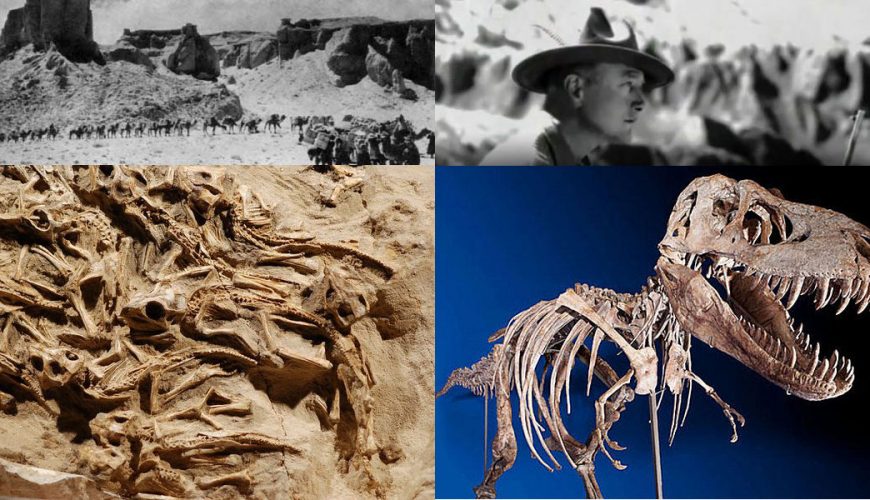 The Mongolian Gobi Desert is known as one of the best places to find dinosaur fossils in the world. Mongolian-Polish joint expedition discovered new species mammals, dinosaurs bones and eggs from Tugrugiin Shiree nearly Bayanzag from 1960-1970.

Fighting dinosaurs of Mongolia-one of the most famous fossil find in the world. It registered a national treasure of Mongolia. The two Fighting Dinosaurs a fierce Velociraptor that was apparently buried alive while attaching a plant-eating, shield-headed Protocertops.

Tarbosaurus is genus of tyrannosaurid theropod dinosaur that flourished in Asia about 70 million years ago, at the end of the Late Cretaceous Period. The fossils have been discovered in Gobi of Mongolia. Although many species have been named, modern paleontologists recognized only one Bataar. Like most known tyrannosaurids, Tarbosaurus was a large bipedal predator, weighing up to six tones and equipped with 60 large teeth. It had a unigue locking mechanism in its lower jaw and the smallest two fingered forelimbs relative to body size of all tyrannosaurids.

On top of one of the nests of dinosaur eggs discovered in 1923 laid the skeleton of an animal though to be stealing the eggs, Oviraptor philaceratops. In 1993, addition eggs were found in the Gobi that closely reseresembled those of 70 years earlier. One of the eggs contained a fossilized embryo, which researchers identified as a developing oviiraptorid- a member of the group that includes Oviraptor. Late discoveries of two adult oviraptorids sitting on groups of eggs confirmed that they nested in the manner of modern birds. The eggs protected by parents.